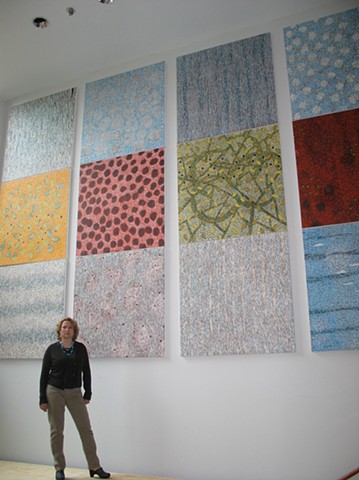 In music theory, the comma is an interval between notes of different temperament. Its historical origin, the Greek komma, provides instruction for breathing while reading aloud. Conceptually, the comma separates and joins both space and time by acknowledging a past and anticipating a future. And this is something that art can do. It can suspend us between states of being, between meanings, commanding us to pause in our everydayness.

In the scroll landscapes of China, the “qi” (the atmospheric void) punctuates the here and there. Such in betweens cause our consciousness to levitate between grounds, becoming crystallized through a merging with the sensed. Leonardo da Vinci called this atmospheric zone, “colored air”, the tempered blue space that exists between the penetrating forward gaze of La Gionconda and the invented landscape behind her. Mark Rothko made this “colored air” his primary subject, painting the “qi” with a visual resonance that vibrates before and after our seeing – a neuroimaging un-encumbered by tangibility.

For many years, my paintings have represented the tangibles of landscape, the parts-of-the-whole – leaves, vines, bodies of water, blades of grass, and pieces of earth – isolated, then reassembled to convey the “spirit” of the experience of being in the land. Then, in 1998, my abstract landscape paintings began to employ the aesthetic punctuation in Islamic text. Interspersed between their elegant calligraphic lines are gold leafed roses – small ones for the pause of a comma and large ones for the finality of a period. A punctuation enhanced with the sensual memory of an aroma. Just as on a string of prayer-beads, these negative spaces, revitalize and pace us – punctuation on a string.

In the year 2000, I saw an exhibition of Korean earthenware at the Freer Gallery in Washington D.C. These simple bowl forms had elegant “repairs”, some of which were gold leafed with intricate designs that sharply contrasted the simplicity of the earthenware. These “repairs” seemed to directly contradict my Western concept, that any repair was an imperfection to be concealed. But, in these ceramic forms, the “imperfection” was celebrated. It punctuated how the bowl had been, that something had happened to it, and how it was now to be. Both the Islamic punctuation and the Korean repairs became devices that simultaneously regulated and disturbed the visual processing of my paintings – the sporadic respiration of a comma.

The natural progression with my work has been to liberate the “aesthetic” comma to break the string, to force a “repair”. The negative space, “the silence between the notes”, became my primary subject as references to a sensual memory of light and shade, of texture, of color, merging background with foreground, in with out – an anticipation of nothing finite.

I am not yet certain by what word I must now refer to my paintings, but landscape has lost its firmament. It has been sucked into the black abyss of the comma to be re-born as a shattered, liquid lens containing particles of experience – vibrating in between the here and there in space and time - wonderfully adrift when punctuation has mutinied.